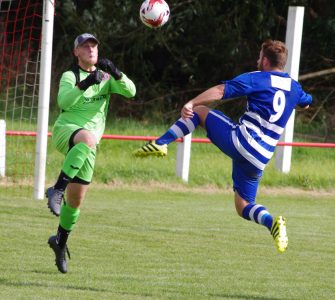 Our roving reporter Gav Frost asked if he could catch up our keeper Harry Scott. Of course we said, so we waited for Harry to return from the United States and at no expense to the club here is what Harry had to say on his return to the club.

GF – So Harry welcome back. The first time I saw you play for Worsbrough Bridge was away at Retford last season, what was it like being thrown into a NCEL team that at the time was deep in a relegation battle?

HS – It was tough game to be in especially at this level. I had been away from the team for some months, so it was a big game to prove myself and unfortunately the result didn’t go our way, but that’s what it is like at this level and standard, on paper you can be the better team but is down to how you play on any given day.

GF -So shortly after after that game you set off for your scholarship in the USA, can you tell us how that came about and what the experience was like for you?

HS – Luke (Forgione) posted an advertisement for the scholarship agency to go for an assessment day and from then I played a few trial games with other players trying to get the scholarship and after that I had to get a collection of videos of me playing to send to the universities and after that I got accepted to Coastal Bend College in Texas. The Texas lifestyle was different, the community was so close that you could walk around the town and people would know about you from the college. The weather was a big part of my time there and getting used to it pretty quick was harder than expected.

GF – You seemed to have had a successful season over there, so much so you have been signed by another team, how does that feel?

HS – It feels good to be recognised for all my hard work by a bigger team which will give me a better opportunty to improve myself and to play against some unreal talent.

GF – What’s the standard like in the leagues over in the United States?

HS – For university level the standard is great, you get players from all around the world coming over to play and there is some unreal talent coming from Premier league academies to Serie B teams, then going to USL 2 which is the top semi pro standard in the US you get the top players from all universities coming together for just 3 months in the summer and you can learn a lot from them, and the coaching is top class.

HS – The new team at Worsbrough is more all round fitter, some of the players don’t have as much experience compared to the team I used to play with, but this new Worsbrough team will go far in my opinion.

Thanks to Harry for the interview, from everyone at the club it is great to have you back and we wish you well for the future when you return to the USA.