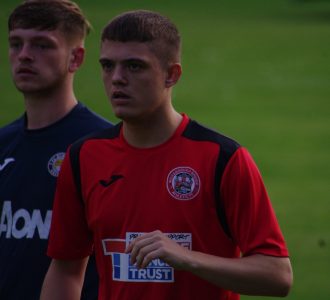 Our intrepid reporter Gav Frost continued his round of player interviews and caught up with Callum Walton for a chat about the season so far.

GF – So 9 starts so far this season but you have been on the bench on a few occasions, how do you feel the season is going for you?

CW – On a personal level I feel as though I am underachieving but its a team game and the team in my opinion is well on course for what we want to achieve, even though I know some people say we are overachieving.

GF – You have also shown your versatility in being able to play quite comfortably in a more defensive role, do you feel that playing in various positions helps you?

CW – I like to think I am good enough to play anywhere on the pitch and do a good job, so as long as I am playing football I will play anywhere the Manager asks me.

GF – You mentioned in your first question that some people may feel like the club is overachieving, does that motivate the team to continue the good season?

CW – I can’t necessarily speak on behalf of other people but I would like to think so. Normally in previous years people on the outside would just look at Worsbrough and think that we are not that good, relegation fodder etc, but I think we are starting to change those opinions.

GF – What are you personal ambitions for the rest of the season?

CW – Personally I would like to chip in with a few more goals and assists which the gaffer is already onto me about, but I have got to get back into the starting 11 to do that and Harley (Holt), Spen (Spenser Sheppard) and Hutch (Alex Hutchinson) are playing well. My ambitions for the team are to string a few wins together and get a nice unbeaten run going and then see where that takes us come the end of the season.

Thanks to Callum for taking the time to speak to us and we which him the best of luck for the rest of the season.