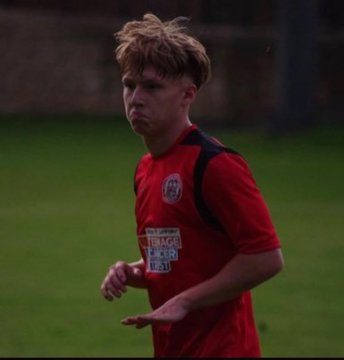 Our roving reporter Gav Frost caught up with recent birthday boy Harley Holt, fresh from his goal at Rossington Main on Saturday.

GF – You have made the step up to Senior Football in the last year or so, what in your opinion is the biggest difference between Academy Football and men’s football at NCEL level?

HH – The biggest difference is that Academy Football is not focussed on results, it much more focused on development until you reach a certain age, but perhaps the biggest difference is you have a lot more time on the ball in Academy Football. NCEL football is more physical and physically demanding. In the Academy they focus on playing one way which would be whatever the philosophy is at the club, in NCEL game formations can be changed week in and week out depending on the opposition.

GF – You where brought in by Luke Forgione during what was a difficult period for the club results wise. What was it like being brought into the team under difficult circumstances?

HH – I was only 16 when first came into Worsbrough Bridge and it did take me a while to get used to the differences of playing senior football at NCEL Level. At the time I came in there were lots of different and strong characters in the changing room which I took as a positive as I have got to see how the older more experienced handle themselves.

GF – This season the gaffer has added to the squad with a couple more experienced players such as Conor Glavin, Mike Jepps and recently Luke Danville. Did the lads expect to have the start that you did?

HH – Honestly, for me it wasn’t a surprise. For some outsiders who might not be in and around us often it might be a shock but being with the lads week in, week out and seeing the quality we do have it is frightening. Adding those experienced players really has helped us come together as a team. We all know this season can be one to remember, we just have to take it game by game and see where we end up.

GF – Finally what is your goal target and what are your expectations for the rest of the season?

HH – For me it is all about improving. I feel like I have made a good start to the season, especially recently where I have started to add goals and assists to my game. Hopefully I can carry on this good run and keep doing well for the team.

Thanks to Harley for sitting down to chat with us. Good luck for the rest of the season.